'Eye Of The Storm' on

Hi, I'm Dennis Siggery. In 2016, I formed this new line-up pf the Eric Street Band with Gordon Vaughan, Henry Smithson and Adam J Perry, with a view to doing more live work. After a few gigs, Gordon and I started writing songs together which ended up as the 'Purple Passage' album - recorded and released in late 2016. More live dates followed, including the 2017 Wokingham Festival. Then in 2018 Gordon and I started writing the material for 'Eye Of The Storm' which we recorded in Nov 2018 and finished off in Feb 2019. The album was released in April and is available right here!

This band is some of the best musicians I've ever worked with! Gordon is without doubt one of the finest guitarists in south of England - just check out his playing on the albums. The writing partnership we have means that the songs develop with a mixture of varying styles, but remaining true to the blues-rock genre. The solid and creative rhythm section of Henry and Adam - both highly skilled and experienced players - allows us to stretch out in the studio and lay down the backing tracks as a band - live! We're getting the feel and the vibe off each other, and I think this gives the songs on these two albums a slightly harder edge and more excitement than on the previous albums. Meet the band... 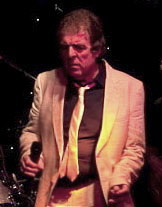 I became interested in music at very early age. At just sixteen I joined a band called The Five Diamonds as lead vocalist and we played a number of local gigs and youth clubs. I stayed with the band for a few years before taking up a career as a DJ in an R&B club playing Blues and Soul music.

Then I did what most of us do, got married, got a "proper" job and let music take a back seat. But by 1996 I had the urge to sing again, and with the help of a few friends I formed The Acoustic Blues Band. We played bars and clubs and recorded one album, 'Our Kind of Blues' - half covers, half originals. I got hooked on recording and decided to try a solo album - and ended up making seven! The albums turned out to be basically Rock music, all except the last one 'Back To The Blues' which began to hint at a future direction.

In 1999 The Acoustic Blues Band became The Southside Blues Band. This band were together in various line-ups for nearly a decade playing pubs, clubs and festivals, but only recorded two albums.

As explained below, I met Neil Sadler when I went into No Machine Studios to record one song and with the his help I came out later with three albums! The two of us decided to get some musicians together and form a band - the Eric Street Band. We played a couple of local gigs, one of which was recorded live and an album was made - 'Eric Street Band - LIVE'. Following the success of this, we were asked to support The Animals at The Wallingford Blues Festival in 2009. Since then we recorded nine more albums ending in 'Across The Board' in 2016. These are all listed here in the ALBUMS page.

Later in 2016, I was itching to do more live work, so I formed the new Eric Street Band with Gordon Vaughan, Henry Smithson, and Adam J Perry. Gordon and I started writing together and it didn't take long before we had a whole album's worth of material - which became 'Purple Passage' - released in late 2016, marking a new chapter with the new band... 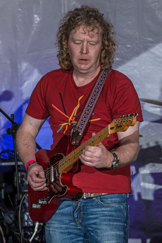 Gordon has been a long-time member of Reading band, Jive Alive - now the house band for the legendary Twyford Blues Sessions, where he has played with many top British blues names including ex-members of The Yardbirds, Savoy Brown and Jethro Tull.


He was also lead guitarist with The King Earl Boogie Band, along with ex-members of Mungo Jerry and Status Quo.


He continues to play with Jive Alive, the Keith Allen Band and now the Eric Street Band! 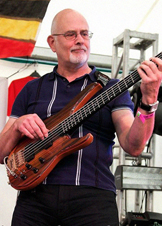 Henry started off supplying the low-note groove in Reading in the late 70's into the early 80's, when he played with new wave power-poppers, The Romantix, Swindon's 90Six Tears, and local songwriting legend Terry Clarke.


"Playing with Dennis and the Eric Street Band is real fun for me. We're solid, dynamic and tasteful behind Dennis's unique vocals, but we can also stretch out and be inventive in the solos. It's a band that really goes for it!"


Henry is also the Mastering Engineer at CD MASTERING BY HENRY 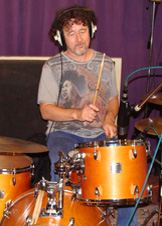 Adam started playing drums at primary school, having been encouraged by a teacher there called Bob Christopher and inspired by watching drummers on 'Top of The Pops' during the 1970's. Before long he was gigging and recording with bands locally. Being the era of New Wave and Punk, it was a great time to start. He was playing gigs in London by the age of 17.

During the 1980's he started gigging and recording with his own groups writing his own songs and music. This led to him joining a UK based band called Asylum. They wrote and recorded 3 albums and went on to tour and record across the UK, Europe and USA. He also worked with the legendary UK rock group New Model Army.


Adam now teaches drums, both privately in his own studio, and at schools on the Reading area. He's also still out there gigging, recently with The Mick Ralphs Blues Band (featuring Mick Ralphs, legendary guitarist, songwriter and founder member of Mott The Hoople and Bad Company), Jack Cade and the Everyday Sinners, The Kickback and now the Eric Street Band.


The Eric Street Band was originally formed by me, Dennis Siggery, with Neil Sadler from No Machine studios in Wokingham. He became my songwriting partner, guitar player and producer for all of my Eric Street Band albums - from 'Eric Street Band Live' right through to 'Across The Board'. I met Neil when my old band, The Southside Blues Band, went into No Machine Studios to record some demos. I asked Neil if he would help me produce a song as a tribute to a man who had helped the band. The association didn't stop at one song and with three albums under my belt and spending most of my time in the studio, I thought it best to disband The Southside Blues Band.

With similar musical tastes, Neil and I decided to get some like-minded musicians together to play some of our favourite blues songs. We decided to get some gigs and as an experiment record one of them just to see what it sounded like. It turned out so well that we decided to release the live album of the material - the Eric Street Band was born!

I'd been singing in blues bands for years, doing the circuit, playing the blues classics. Great songs, yes, but so many bands were out there doing the same numbers. We decided, in the blues tradition, to try and put our own stories to songs - original songs about life as we see it, living here in the UK. During our association, we've had great reviews for both live shows and the CDs. Our album 'Company Man' was voted album of the year by 'Blues In Britain' magazine, and our music has been played all over the world on numerous broadcast and online blues & rock radio shows...

"The Eric Street Band are without a doubt one of the finest Blues / Rock bands to come along in a very long time. You listen to one of their CDs and you will be hooked by the pure honesty of this marvellous blues band... you won't be disappointed"

Much credit for our success has been due to Neil Sadler - co-writer, musician, engineer and producer of the original Eric Street Band... 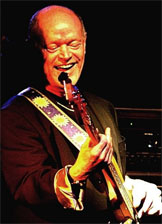 Started playing the guitar at fourteen, first band - Captain Galapagos and Sea Lizard. and was in other bands - Nightporter, Silva, Skeeta, Hazzard. Had some early success with a band called The Moonwalkers. Was signed to CBS records in the early 80s with a band called Sleeping Lions.

Later on I was a founder member of The UK Blues Project in 1987, recorded 'Saved by the Blues' and 'No Rush'.

I started my own recording studio in 1994 - No Machine Studios. Been recording there ever since.

I've jammed with Ian Anderson from Jethro Tull; worked with The Larry Miller Band, and recorded his last six albums and played Bass on a few gigs; I also work with Christina Al-Wakil in a specialist Blues/Jazz duo featuring classical guitar and trumpet.

Currently I work with UK band Blue Touch, gigging around the country, and recorded two albums 'Bump' and 'Grind'.