'Eye Of The Storm' on 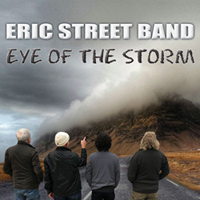 The new ERIC STREET BAND album 'EYE OF THE STORM' is out now. You can buy it here in the CD Shop - and downloads are available on Bandcamp & Amazon Music. Check out the new video, 'Child Of Yesterday" on the Videos page!

Here's part of the review in 'Blues Matters'...

"...Yet again I have found a band who are far too original, inventive, and talented not to be enjoying seriously big success. I can only hope that someone puts them out on the road with a major draw so more people can enjoy their wonderful sound and style. Buy this album and see this band, I insist!" 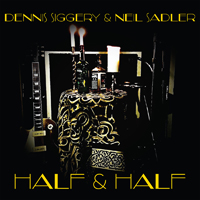 
Dennis and Neil were the creative force behind all the classic Eric Street Band albums, from the 'Eric Street Band Live' through to 'Across The Board'. Now they've reunited for this new album. Here's what Dennis says...

'This new album wasn't on my agenda, but I hadn't been very  well for several  months and the doctor sent me to the hospital for a scan. I got a letter back a few days later telling me to come back and see us ASAP. Scary stuff - I thought this could be my lot, so I just had to write and record one last song! I took to Neil and we came up with 'Don't Want Your Tears'- the opening track. I wanted to leave this message behind in the words to those who said, "why are you still recording and writing at your age?"'

Here are extracts from a couple of reviews...

"... the opening self-written track, Don’t Want Your Tears, is a real tour de force. It starts with a quiet guitar sound that grows in strength sounding very similar to the Clapton work on the Edge of Darkness TV Theme, before Dennis cuts in with a restrained emotional vocal. Towards the end of the song Neil Sadler lays down some tasty lead guitar leaving you with nine minutes of pure joy…"

"Dennis and Neil have a history of working together going back many years, mostly on several Eric Street Band releases. Anyone familiar with that band will know that Dennis has a distinctive style of delivery and that he writes songs that are from the heart, often based on experience and sung with honesty and integrity... I can’t recommend this highly enough, great songs well played and produced from the heart. No half measures here!"

You can buy the CD or downloads on the DENNIS SIGGERY SOLO page, where you'll also find the full reviews, more info, and the new video of 'Don't Want Your Tears'.

Thanks for visiting! While you're here, you can check out our videos and music, buy CDs, and read more reviews of albums we've released over the years. You can also find out about the solo albums from singer, Dennis Siggery.